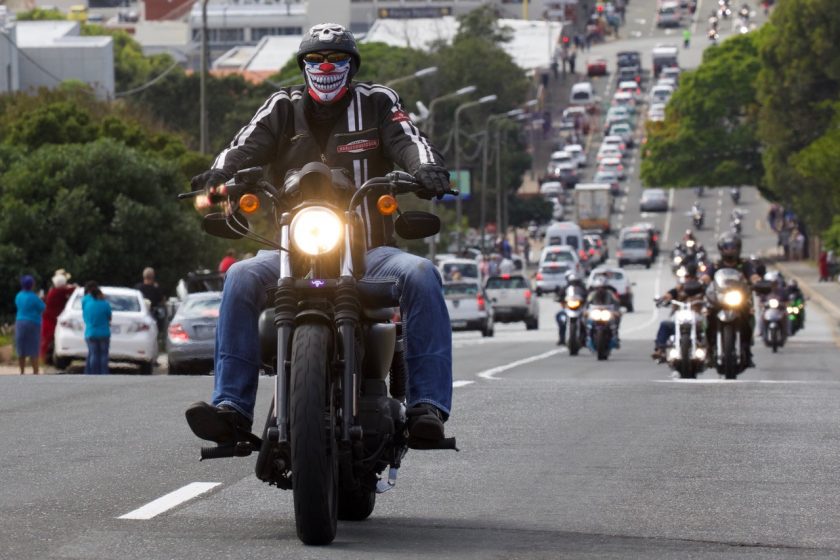 The 13th Buffalo Rally held in Mosselbay from 16-18 March 2018 was in all aspects a huge success with some 4300 bikers roaring into town from all outskirts of the country.

The influx started Thursday afternoon in dribs & drabs amids a chilly drizzle, but by Friday afternoon the skies had cleared and the camping site and beer tent at the De Bakke/Santos resort was abuzz with biker buddies reuniting and sharing a few cold ones.

Saturday’s highlight was the traditional mass ride along the Point where several bikers got hijacked by the tempting seaside restaurants.

The bikers and locals mixed and mingled like long-lost friends and a cheerful, festive vibe prevailed throughout the weekend.

The Nomads Motorcycle club, who organised the Rally in conjunction with the Mossel Bay Municipality, went out of their way to ensure all legal and local requirements were met, while local Police and traffic officers kept a visible presence to maintain law and order.

On Sunday afternoon, after the last riders had evacuated the premises, it was hard to believe that thousands of hardy bikers and local supporters had been partying there non-stop for four days.

After 13 years, the bikers and local authorities have established an amazing partnership, built on mutual understanding and respect, and they work together like a dream team of efficiency to host one of the best-organised and most enjoyable biker rallies in the country – in one of the most beautiful towns in the world!

Well done, Nomads. Well done, Mossel Bay. It was a beast of a feast!

Underneath is a summary of our day to day photo commentary of the event. Scroll down and click on the links for the best photos and videos of the 2018 Buffalo Rally in Mossel Bay :

It’s a B-weekend in Mossel Bay – busy, bikes, beer, beauty, bliss, beards, buddies, buff bikers and benevolence! The 13th Buffalo Rally in the Town of the Year kicked off with a bang and the streets are abuzz with roaring engines and a festive vibe.

They came in dribs & drabs – in all shapes, speeds and sizes –
from Botswana and Bellville to Bloemfontein . . . and by this afternoon Mossel Bay was beleaguered by BIKES, beer drinking BIKERS and braaivleis fires!

Even the skies cleared this morning to give the bikers a break after yesterday’s cold drizzle and many used the opportunity to go bike-hopping through town to explore the various pubs and grubs.
Even the Mayor of Gaborone, Kenny Pieterse and his team from the Ulysses Club Botswana were seen enjoying some cold refreshments and superb scenery at a seaside restaurant – and showed us their secret club sign

The camping site and beer tent at De Bakke/Santos was a colourful beehive of cheerful activity and happy reunion with old biker friends.
Although it was too early to confirm, a whopping 6 000 bikers (or even more) are expected to attend this 13th Buffalo Rally in Mossel Bay.
Tomorrow is the highlight of the festivities with the traditional mass ride along the Point at 11:00 in which Mossel Bay’s Mayor Alderman Harry Levendal and municipal manager Thys Giliomee are both partaking.